A Conversation with Author of “The Stories I Never Knew”

“THE STORIES I NEVER KNEW”:
Acts of Lovingkindness Amidst the Struggle for Human Rights and Dignity in the Occupied Palestinian Territories & Israel 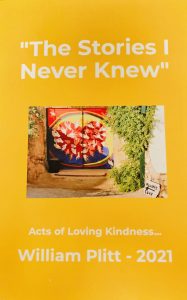 A Conversation with William Plitt

REGISTER ON ZOOM:  icmep.org – Programs and Events in February
https://indianacmep.org/event/stories-i-never-knew-william-plitt/

In light of the January 28th attacks on Daher and Daoud Nassar on the Tent of Nations farm, this previously scheduled conversation will include an update, while also focusing on the Stories Bill wrote about. Click here for Bill’s message to conversation registrants.

Between 2006-2019, Bill Plitt visited both Palestinians and Israelis, listening as they shared what their lives had been like in the past and what they were now like in the world of today’s turmoil. Bill found people who showed great hospitality to the stranger, shared meals, who opened up their homes, and shared their laughter and their sorrow. He played with their children, celebrated births, birthdays, and graduations, and made new friends. Wadi Qelt; Manger Square; street corners; churches; private homes; every place he found a quiet space needing to be filled. He wrote poetry, creating images of what he experienced.

And he writes about a Palestinian family farm and the family’s 30-year efforts to save it from being declared as State Land by the Israeli authorities. The farm is known as Daher’s Vineyard, or Tent of Nations, and their story resulted in several individuals in the United States in 2007 forming the Friends of Tent of Nations North America. You will come to know this family’s belief in non-violence toward those who commit acts of violence. Their way will win in the end, overcoming obstacles, persistence, and “refusing to be enemies.”

Maybe it is possible that
Walls, lines, fences and borders
Might crumble, melt, and
Disappear like other human
Fabrications.
Maybe?