History of Friends of Tent of Nations North America (FOTONNA) 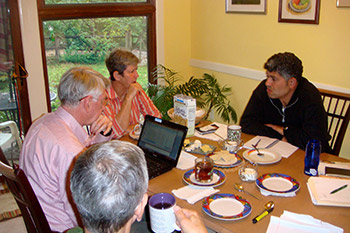 Serendipity? Luck? Fate? A chance encounter? Maybe all of those things rolled into one are what Friends of Tent of Nations North America (better known as FOTONNA) is all about. Three strangers – one shared experience – lives changed forever. There is power in encounter, especially when it is coupled with a shared passion and experience that creates a cause that feels so right to support.

In June 2006, Mark Braverman (a Jew) took a huge leap of faith and traveled with an Interfaith Peace-Builders (IFPB) tour of Israel/Palestine. His unquestioning support for the establishment of the State of Israel and the history he had been taught were going be tested and challenged like never before. This was going to be a life-changing experience for Mark.

In November 2006, Bill Mims (a Quaker) and Bill Plitt (a Presbyterian) happened to share the same IFPB trip; their lives were going to be changed in ways they could not have anticipated, also.

On the IFPB tours, many of the Israeli and Palestinian peace projects are major stops along the way. They are all very impressive, but one that stands out for many people because of its unique location and setting is the Tent of Nations (TON) – located on Daher’s Vineyard, a 100-acre farm located about six miles southwest of Bethlehem. All three of the men in this story were fortunate to have this stop on their tour, and they became immediate friends of Daoud Nassar (the Director of TON) and his family. They were entranced with Daoud’s family history and his deep faith and the entire Nassar family’s strength of character. There was also something very spiritual about this place. How could they not feel the intensity of the history of the entire area as they entered into the renovated caves on the land that has housed families for generations? Three religions blossomed and grew and spread worldwide from here – spiritual, indeed. At TON, however, that feeling is magnified – made more intense – felt more deeply. People say you can reach out and almost grab hold of the air on this hill-top farm.

As “luck” would have it, Mark and the two Bills lived fairly close to one another in the U.S. After much discussion, several questions emerged: How can we help support TON? How do we tell this story? How can we educate and engage others in this struggle? How do we become a part of the solution through active engagement and not be a part of the problem through passive hand wringing?

These visits in 2006 – this highly-motivating human experience – and the ensuing conversations throughout 2007 had to generate some focus. What emerged was a clearly-defined mission and strong personal commitment to a just cause. A three-person Board of Directors was formed in order to support a formal application for 501(c)(3) status for FOTONNA as a corporate entity (though that non-profit status was eventually denied by the IRS in 2012 – please see our Donation page). It seems that many threads had come together to weave an unforeseen pattern through chance encounters and the force of passionate individuals. As simple as that, FOTONNA was created.

That story is just the beginning, however, as FOTONNA has grown and evolved over the years and now has an Advisory Council that is filled with dedicated individuals who have traveled to the land extensively and are truly well-versed in the situation on the ground. You can read more about these pro-active individuals on our Advisory Council page; they are very impressive, and we consider ourselves very fortunate to have their support and to have them give us advice as we continue to move forward.

Historically, why so many people have come to support the Tent of Nations is no surprise. Back in 2006, the Nassar family story that was heard by Mark and the others was a story of persistence and creative acts of non-violent resistance. The persistence was shown in the fact that the Nassars refused to leave their family’s farm and also refused to be enemies with their neighbors. The creativity came in the pursuit of their dream, overcoming all obstacles put in their way and establishing a place where people of all faiths and backgrounds could come together to work for peace and demonstrate against the occupation in a non-violent way.

One of the things we have been able to do over time in order to fulfill our mission is to sponsor tours for Daoud in the US. From 2007-2017, Daoud has traveled to the US on 20 occasions (on two other occasions, emergencies on the land kept him from making the trip). On one of these trips, he was accompanied by his wife, Jihan Nassar, and their three children. He was also able to bring each of his two teenage daughters on separate tours who spoke with the younger generation and shared their gifts of music and passion for their story. On a recent trip, Jihan was able to travel with him and tell her own story at a Tree of Life Conference in Cape Cod. Daoud has shared his story with people in a wide variety of venues and has spoken at nearly 400 sites (including churches, synagogues, mosques, seminaries, peace and justice groups, private homes, high schools/universities/colleges and at conferences) in over 60 cities and towns. His message is always filled with his family story, his faith journey and the dream of peace with justice throughout the entire region. You can see a listing of all his past tours here – upcoming tour here and can read about how you can engage Daoud in your area as a guest speaker. Please check this page for more information: https://fotonna.org/planning-a-tour/

We have also raised funds through donations, both large and small, enabling FOTONNA to assist the Nassar family with fulfilling Bishara Nassar’s (Daoud’s father) dream of a place where people could come and work together for greater understanding. You can read about what these funds have enabled the Nassars to do on our Donation page, and you can become a part of this movement through your own donation of dollars and/or time.

FOTONNA has developed many circles of friends that continue to organize and support venues in this country at increasing rates as they hear the family story, as they travel to the farm to volunteer, and as they share their experiences with others. Our mailing list now numbers over 2,800 people who receive the quarterly Newsletter and updates and ‘action’ alerts. FOTONNA also maintains a Facebook page that has a huge following from around the globe. The network is used to update, educate and engage people if/when needed as emergencies arise. You can read more about this and how to become directly involved on our How Can I Help? page, also.

FOTONNA and the Nassar family are looking forward to the day when Tent of Nations becomes a self-sufficient entity, capable of sustaining its projects and programs through the family’s own hard work and commitment to Peace with Justice for both Israelis and Palestinians of all religions. With the support of so many friends, the vision of a Peace Village on Daher’s Vineyard will one day be a reality. Help us continue to make history along the way, and help us make a difference!