Tent of Nations MISSION and GOAL 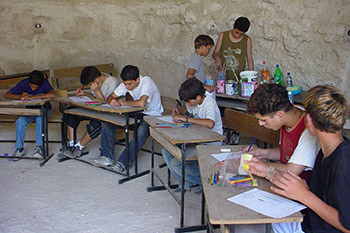 Group of young people in the cave attending a workshop

Tent of Nations is devoted to addressing cultural conflicts around the world, including the Israeli-Palestinian conflict, by facilitating positive encounters amongst young people from different cultures. To serve the mission of Tent of Nations, the Nassar family seeks coexistence with Israel in a shared Palestine and is committed to nonviolence as the means to reach that goal.

Goal
In the long term, Tent of Nations desires to prepare young people for a positive contribution to their future and their culture by bringing values of understanding and tolerance into their life experience and to teach them the true meaning of belonging to their country. 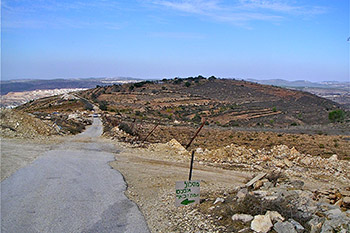 View of Farm from Road

History of Tent of Nations

A 100-acre farm, located about 6 miles southwest of Bethlehem, was purchased in 1916 by Daher Nassar – Daoud Nassar’s grandfather. They named this farm Daher’s Vineyard, and the family lived on and worked this farm, turning it into a very profitable vineyard. After Daher’s death around 1918, two of his sons, Bishara and Nayef, continued the work on the land. Bishara married a young woman named Milade, and they had nine children, one of whom is Daoud. Daoud’s Uncle Nayef and Milade and the children continued the work on the farm after Bishara’s death in 1976. Nayef died in 1987, and eventually the major part of the work was taken over by Daoud and his older brother, Daher. One of the sisters, Amal, works as a physiotherapist in Bethlehem but spends as much time as she can on the farm, telling the family story to international visitors when needed and helping Milade continue to carry out the dream of her husband.

Before Daoud became deeply involved with the farm, however, he studied abroad in Austria and Germany, taking classes in Bible Study and Tourism, preparing to offer alternative tours to visitors to the land – something other than the typical Holy Land Tour offered by the Israelis. While living overseas, Daoud experienced the kind of freedom not afforded to Palestinians in their own land, and it was tempting to stay and study abroad for as long as he could. In 1991, though, the pull of the land was too strong to ignore, and something within him compelled him to return. In August 1991, the Israeli courts declared the farm as “State Land”, and with that declaration, Daoud knew why he had been called back: The struggle to hold onto the land had begun, and he also understood that he was being called to help realize his father’s vision of creating a place of positive peacemaking on Daher’s Vineyard.

Daoud had significant doubts about his decision, and he was surrounded by other doubters (including some in his own family), but something became very clear during the second Intifada in 2000 when the family was forced to ask themselves the following question: “Are we going to allow ourselves to remain in the chains of our recent history or are we going to break out and try something new?” Because they chose the latter course, Tent of Nations was given birth as a way to exercise control over their destiny and not be a victim of circumstances outside their control.

Daoud had a vision that he knew would take a long time to be fully realized, and he knew that the family could not do it alone. Starting with small projects and guaranteeing their success was the first step. With Daher being willing and able to live on the farm and do much of the supervision of the work there, one hurdle was overcome – maintaining a physical presence on the land. The second hurdle was to not only provide long-term goals of where the farm was headed, but a plan to meet these goals needed to be put into place; this fell to Daoud. It seemed that there was so much to do – water, electricity, planting, animal care and feeding, housing and feeding visitors, volunteers, transportation, finances, infrastructure, etc. At times it seemed daunting, but, step by step, the dream seemed closer and closer to becoming reality as international visitors and volunteers began to come in greater and greater numbers as the story of the family’s struggles and dreams became known far and wide. 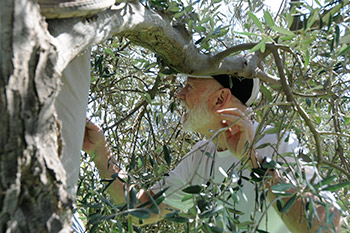 Between 2007 and 2017, there was an average of around 7,000 visitors/volunteers annually on the land. They came for a few hours, a few days, a few weeks, a few months, even a year. They came to share a meal, attend a workshop or conference, work on the land, plant a tree or harvest fruit, teach at the Women’s Education Center, teach and play with the children during the Summer Youth Camps, or stand in solidarity with the family during times of crisis. As the family farm thrives, so does the prospect for peace with justice thrive as a hope throughout all of Israel/Palestine. The family motto is: “We Refuse to be Enemies.” The Tent of Nations Peace Project provides a place of peace, energy, light – a place where dreams can come true through hard work and dialogue with one another – a place where people can “Build Bridges of Understanding” – a place where a Peace Center can be built.

(You can also see an updated timeline on our Updates:  Timeline of Events page.)

We invite you to become part of the growing number of supporters of Tent of Nations. Together, we can make change happen.

By viewing this 3-4 minute PNN video, you will get a very good picture of what Tent of Nations (TON) is all about. You will meet Daoud Nassar, hear a brief history of the land, see the farm in action, and begin to see why supporting this peace project is so important.

Daoud also tells the family story at his presentations, but in order to understand the full history of the farm, you might wish to read more details found in his book, Daher’s Vineyard – Tent of Nations: My Father’s Dream.