The Nassar family continues to plan for a time when the farm will be fully self-sufficient. If you visit soon, you’ll see the following special projects — some recently completed and some still in process. 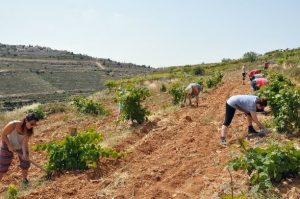 New cave renovations, improvement in the volunteer sleeping facilities, completion of the Farm/Gift Shop, expansion of the animal farm, additional kitchen facilities and a new campsite are just a few of the projects that have been completed since 2010.

Each year, the capacity of collecting rain water in order to have self-sufficiency in water is increased.  Water is life.

Nassar family members and farm volunteers have worked to finish the second and final phase of recycling sewage water to be used for irrigation.

The process of building four new compost toilets is ongoing.  Compost toilets save water.  The biogas fuel unit is already functioning; it is a pilot project, and the hope is to be able to produce biogas out of the compost to be used as cooking gas.

This project was started in 2016; the system is for raising fish.  The fish tank is connected through a pipe with three open tanks filled with stones and sand.  When the water is flowing from the tank into the three open ones, it gets clean from the stones and sand and the fish waste stays there; the water continues to flow into the water tank and from there it is pumped back as clean water to the fish tank.  With this system, fish can be raised to eat and vegetables can be grown in the open tanks.

The green house was destroyed in early 2016 by heavy winds.  Repairs were started with the aim of being ready for planting in 2017.

The work on developing a better infrastructure for animals has been a continuous project.  Work was stopped many times because of demolition orders, but it was continued in small steps.  The animal farm project is important for educational purposes during the Children’s Summer Camps for bringing nature into the life of children; the aim is also for self-sufficiency.  The plan is to grow the family’s own food and eat from what the farm is producing.

In May 2017, two volunteers from the U.S. brought five beehives to the farm and spent three months helping with the beehive project.  The first honey was harvested, resulting in 30 kg (66 lbs.) of pure honey.

In March 2017, the second phase of this project was completed with the help of volunteers from Germany.  The garden has been very useful during Children’s Summer Camps since then.  The children have been able to learn about different plants, herbs and trees.  Most of the children come from cities and do not know a lot about plants and trees.