Today was a great mixture of communal farm work, afternoon workshops, discussions, and optional activities, then a surprise party in the evening.  I am getting to know the many different areas of the 100-acre Nassar Farm, which includes lots of interesting little nooks and crannies along the hilltop and in the fields of grapes, olive trees, and fruit trees down the slopes to the valley below.  Although a Palestinian village can be seen from certain vantage points, the 3 settlements always loom large on the adjacent hills, from almost any place on the farm. 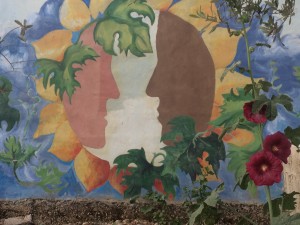 We have been exploring the commitment by the Nassar’s to the idea “We refuse to be enemies,” in our gathering each morning after breakfast and in other forums throughout the day. This afternoon I facilitated a small group discussion focused on what this means to us in our own contexts — how each of us might act on the refusal to be someone’s enemy.  Individuals offered some thoughtful ideas from their lives in other countries far away from ToN.

Abram, a Dutch pastor, told a story about an anti-nuclear protest in the 80’s where he was praying for peace as part of a group of Franciscans.  As students and police got increasingly confrontational, the Franciscans simultaneously switched to dancing for peace, which changed everything. The infusion of joy said, in fact, “We are not fighting each other; we aren’t enemies.”

David, a retired American minister, suggested that changing the spirit of a situation shifts the meaning to “We are all children of God.”  It’s hard for anyone to confront joy, respect, and inclusion with insistence on being an enemy.  The other pastor in the group (there are a large number of them among us!) connected the doctrine of “Love thy neighbor” to “We refuse to be enemies.”

And, Annette from Germany talked about how she and others in her village continue reaching out to new Syrian refugees with support and friendliness, even when the refugees’ expectations are to be isolated and rejected, and they complain of being excluded.

I reflected on my experiences in an interfaith dialogue group.  How difficult it is to sustain a strategy of openness and curiosity, with the goal of real understanding and and compassion, towards those who hold strong positions counter to one’s own.  It may be equally hard and with others in your life who are indifferent or apathetic.  How do we infuse our interactions and dialogue with joy and creative approaches, to move out of the stance of being in opposition.

Daood Nassar asked that each discussion group write down some of its ideas and share them with his family, to help provide inspiration for their ongoing struggle and commitment to creative, nonviolent resistance to the illegal Israeli occupation and 25 years in court to keep their family land. All of us as visitors and volunteers insist that it is the Nasser’s who inspire the rest of us.  Daood reminds us that this is mutual and is the way we build and maintain “the beloved community” of which Martin Luther King, Jr. preached. 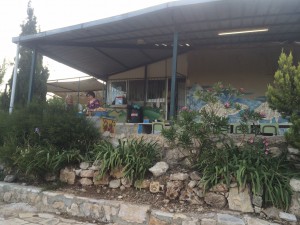 In the evening, the Nassar family hosted the group in Adiyeh’s Tent for an evening of wine tasting.  We heard from an expert about growing grapes, local “table grape” varieties that are also good for making wine, and the first large scale production at the farm this year.  Then we had tastings of the Chardonnay and Cabernet, along with cheeses brought to ToN by our Dutch volunteers.  We raised our glasses to the Nassar Family, this community of friends and supporters, and to “refusing to be enemies.”

Peace to All, and a Just Peace,
Julia