How can a preventable war be justified? And how can one wrap oneself in its rightness in the presence of the horror-show images from Gaza? 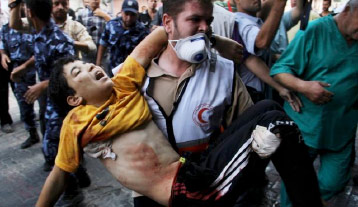 A Palestinian medic carries a wounded child into Nasser hospital, following an Israeli airstrike at their family house in Khan Younis in the southern Gaza Strip, Wednesday, July 23 Photo by AP

It began as a war of choice: A different Israeli policy in the last few months might have prevented it. It evolved into a pointless war. It’s already pretty obvious that it will not result in any long-term achievements. It could still deteriorate into a disaster, and in the end will turn out to have been a war of deception – Israel lied itself to ruination.

The first deceit was that there was no alternative. True, when the rocket barrages landed on Israel, that was the case. But what about the steps that led up to them? They were steps to which there were other options. It isn’t difficult to imagine what would have happened had Israel not halted the peace talks; had not launched an all-out war on Hamas in the West Bank, in the wake of the murder of the three Israeli teenagers; had not held up the transfer of funds earmarked for the payment of government salaries in the Gaza Strip; had not opposed the Palestinian unity government; and had eased up on its blockade of the Gaza Strip.

The Qassam rockets were a response to Israel’s choices. Afterward the goals snowballed, as they always do in wars – from stopping the rockets, to finding and destroying the tunnels, and on to the demilitarization of Gaza. They might well continue to snowball, to who knows where. “Quiet will be met with quiet.” Remember that? On Friday, Israel rejected U.S. Secretary of State John Kerry’s cease-fire proposal.

​The second deceit is that the occupation of the Gaza Strip has ended. Imagine a besieged enclave, whose inhabitants are imprisoned, much of whose affairs are controlled by another state – from maintaining a population registry to running the economy, including prohibiting exports and restricting fishing, and which flies in its skies and occasionally invades its territory. Is that not occupation?

The third deceit is the claim that the Israel Defense Forces “does everything in its power” to avoid killing civilians. We’ve already passed the first thousand deaths, a frightening number of them children and the majority of them civilians; with neighborhoods that have been flattened and 150,000 displaced persons with nowhere safe to run. All that makes the claim nothing more than a bitter joke.

The claim that the world supports the war and recognizes its justness is also an Israeli deception. While it’s true that Western politicians reiterate that Israel has the right to defend itself, the bodies that are piling up and the desperate refugees are upsetting the world and generating hatred toward Israel. In the end, even the statesmen who support Israel will turn against it.

The next deception is that this war has shown “the People of Israel” to be “a wonderful nation.” It’s been a long time since there has been such a mendacious, intoxicating, saccharine and self-congratulatory campaign. The nation has pitched in to support the troops, and that is moving. But in addition to the vans filled with sweet treats and the trucks laden with packages of underwear, and the funerals for soldiers whose families live abroad that thousands of Israelis have turned out for and the displays of concern for the wounded, this war has also exposed other behaviors, in all their ugliness. The “soldiers’ welfare committee” that is the People of Israel has been exposed in its indifference to the suffering of the other side. Not a pinch of compassion, not a smidgen of humanity, not shock, not empathy for its pain. The horrific images from Gaza – they are no less than horrific – are met here with something between a yawn and joy. A people that behaves in this manner does not deserve the praise it heaps on itself. When people are dying in Gaza and people in Tel Aviv are disinterested, there’s no cause for excitement.

Nor is there cause for excitement in the incitement campaign against the handful of people who oppose the war. From cabinet ministers and Knesset members to street and Internet thugs — an ill wind is blowing. Obedient citizens only. “Israeli unity”? “The nation is one big family”? It’s a joke. Like the joke that is the Israeli news media in wartime, a propaganda network whose members have issued emergency call-up notices to themselves, in order to praise and extol, to incite and to instigate – and to close its eyes.

And the biggest joke of all, the mother of all deceptions: the belief in the rightness of its ways. The “just war” slogan is repeated so frequently, ad nauseam, that one begins to suspect that even the ones who scream it the loudest have their doubts, otherwise they wouldn’t scream so loudly and wouldn’t fight so easily with the few who try to express a different opinion. After all, how can a preventable war be justified? And how can one wrap oneself in its rightness in the presence of the horror-show images from Gaza?

Perhaps the ground is burning under the feet of the members of this war-justifiers’ chorus as well. Perhaps they also realize that when the battles end, the real picture will become clear. That’s how it always is in wars of deception, and that’s how the war of 2014 will turn out, too.