LONDON — Secretary of State John Kerry, meeting in Rome on Monday with Prime Minister Benjamin Netanyahu of Israel, was confronted with unexpected pressure from the Palestinian Authority, which announced that it would put forward a United Nations Security Council resolution this week demanding a complete Israeli withdrawal from the occupied West Bank by November 2016.

The Palestinian announcement, which Mr. Netanyahu immediately denounced, could put Washington in the uncomfortable position of having to decide whether to veto the resolution. Mr. Kerry, who will travel to Paris from Rome, is expected to discuss with European colleagues a compromise Security Council resolution proposed by France that seeks a two-year deadline for negotiations to create a Palestinian state alongside Israel.

Senior American officials traveling with Mr. Kerry said that no resolution had been finalized or submitted to the Security Council, but that Washington did not support deadlines for such negotiations. 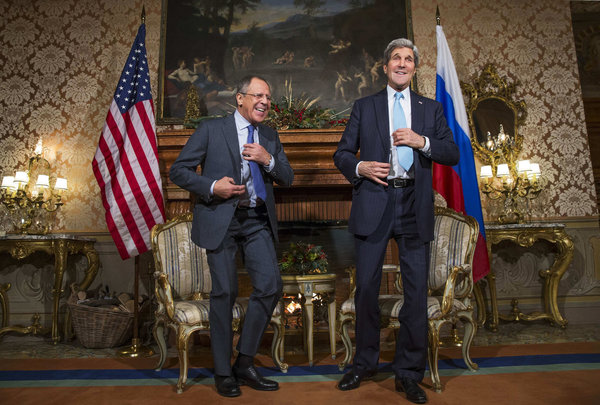 Kerry Piles on Miles, Pressing for a Middle East CompromiseDEC. 14, 2014

At the moment, it is unclear whether the Palestinians — working through Jordan, which is one of the nonpermanent members of the Security Council — can get enough support on the body to submit their resolution this week. Mr. Kerry is scheduled to meet with Palestinian negotiators in London on Tuesday.

“Kerry and the Americans feel that using their veto will be a bit difficult, so they are trying to postpone our presentation of the resolution,” Abbas Zaki, a member of the central committee of the Fatah party, told Voice of Palestine radio.

Washington is also trying to avoid a confrontation with Mr. Netanyahu, who is in the middle of an election campaign before voting scheduled for March.

Washington has vetoed resolutions demanding Palestinian statehood in the past, but patience is running out in Europe. With no negotiations underway, tensions between Israelis and Palestinians are rising, and Israel has continued to expand settlements beyond the lines of the 1967 armistice.

The Europeans regard the settlements as illegal; Washington regards them as unilateral actions and calls them “obstacles to peace.”

Palestinian frustration with Mr. Netanyahu has prompted various moves and threats, including a demand that the Palestinians be granted full membership in the United Nations before any peace settlement can be agreed with Israel.

Washington has said that it does not support these Palestinian actions or any arbitrary deadlines for peace negotiations or an Israeli withdrawal. Still, European sympathy for Palestinian statehood is on the rise. Sweden, whose minority government has fallen, has recognized the state of Palestine, and legislatures in other countries, including France and Britain, have urged their governments to do so.

The Obama administration would seem to prefer to press the Palestinians and the Europeans to put off any resolutions until after the Israeli elections, which could usher in a different prime minister.

On Monday, Mr. Netanyahu denounced the pressures, warned of “Islamic terrorism” and said that “this time, as well, we will not accept attempts to dictate to us unilateral moves on a limited timetable.”

He added, “We will rebuff any attempt that would put this terrorism inside our home, inside the state of Israel.”

Yuval Steinitz, Israel’s minister for strategic affairs, said that Israel expected the United States “to stick to its longstanding policy, and veto” a Palestinian bid for statehood at the United Nations.