Bill is light; I am dark.  Bill is up; I am down.  Guess which one of us is full of hope and which one is full of despair.

This is how we see the world – through very different lenses – and this is why my reflections differ from Bill’s in the broad sense of the world.  We do agree completely, however, on one thing:  There is light and life on the farm we have all come to know as Tent of Nations.  In spite of all the darkness, there is still so much laughter and joy when you join Daher on his tractor and Daoud in the fields and the renovated caves – 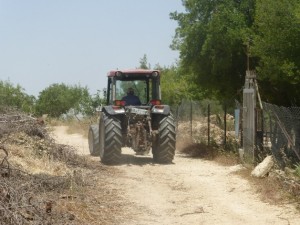 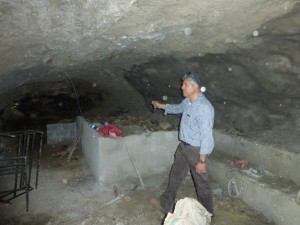 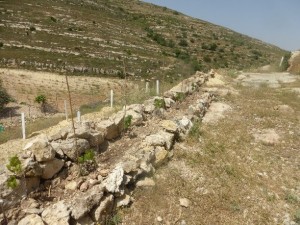 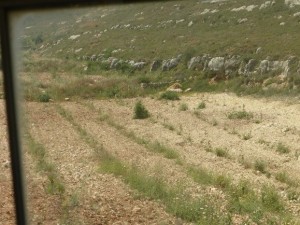 The lonely steadfast witness now has company; terraces were rebuilt by hand and 3,000 replacement trees have been planted by many hands from around the world! 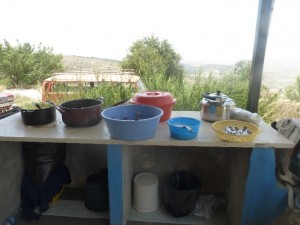 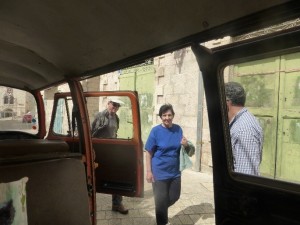 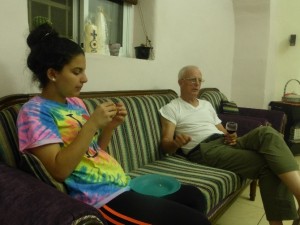 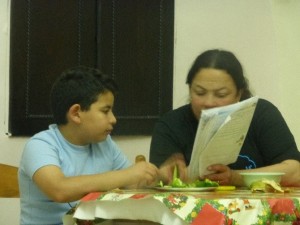 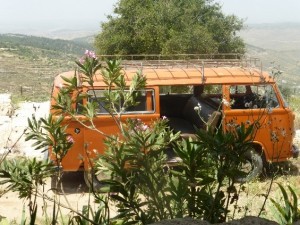 – so much positive coming out of the negative that you can’t help but feel uplifted and full of hope.

And, yes, there is hope for the Nassars if only because they refuse to give up the good fight and will not let the oppressors determine their fate easily – and maybe not at all.  They may be able to overcome all the obstacles set before them and even help save the land of others in the areas surrounding the farm.  They are working from a very basic philosophy:  good will always win out over evil.  For them, this has been working – so far.

The price to be paid for all of this effort, however, is high.  Elbows ache, backs are strained, legs want to rest, shoulders give out, stress is part of every waking hour of the day, and at night, restful sleep can be elusive.  Still, they find time to laugh and joke around.  Daoud tells us that he taught Jihan everything she knows about cooking (and then he forgot it all); he then proceeds to fix breakfast for us by bringing out a box of cereal he has created to share. 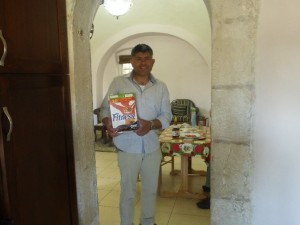 Meanwhile, Jihan has prepared a scrumptious meal of omelets, hot cereal, fresh-squeezed OJ, fruits, yogurt, coffee and tea, and breads fresh from the street vendors.  We think that is the meal for the day until she fixes lunch/dinner at 2:00.  I was so grateful that she loves to cook.  For breakfast at our house, you get the Daoud special of cereal (my offering) or pancakes and bacon (if Bill does the cooking).

We visit Nahalin and the Bent alReef Women’s Education Center.  Jihan finds joy and hope here with the work she does with the women of the village and the international volunteers that come to teach and to learn in return.  The women have taken time off to help their kids prepare for their final exams, so we only get to see some of the final products they have been working on through the art projects Jihan has introduced them to.  The beauty that comes out of these women is quite astounding – talk about making something out of nothing!  You name it, and they can turn it into an art project.

These bags and cup/pen holders are made from recycled plastic bags, if you can believe it!  It can’t be easy crocheting with plastic strips. 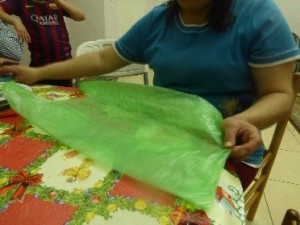 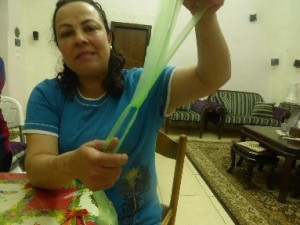 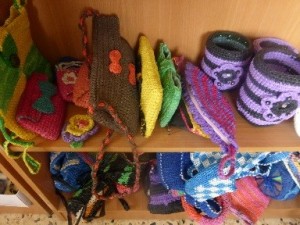 Broken glass and discarded tiles, beads made out of flour and water and glue and painted with fingernail polish, rocks, paper – all used to let creativity flow within a warm and safe environment.  FOTONNA funds were spent on glass paint, necklace/bracelet wire and string and clasps, cutting tools for glass and ceramic, pens, brushes, earring bases, etc.  We hauled a suitcase full of these items for use by the women and the youth in the summer camps.  We were surprised that we made it through the airport with all that loot :  ). 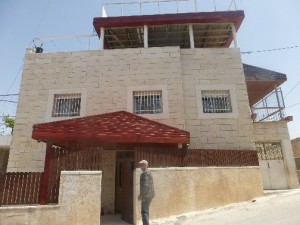 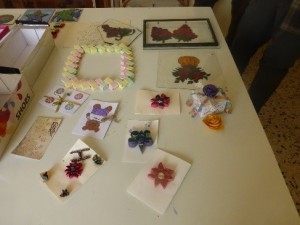 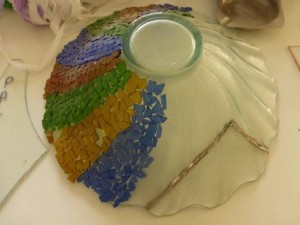 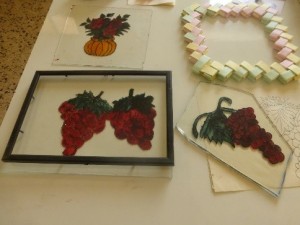 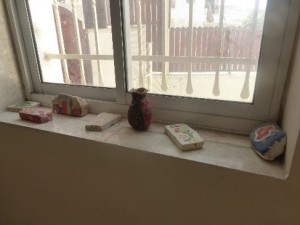 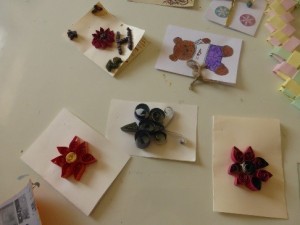 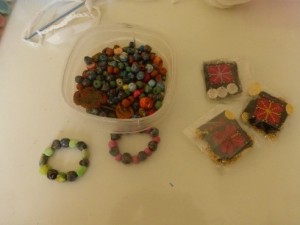 Before we arrive in Bethlehem, however, we spend one night and day in Jerusalem.  We stroll through the Old City Market Place – and this is where the doom and gloom deepen.  There is no eye contact, no laughter, no bantering among the vendors, no effort to get you to come in and buy, no smiles when you do buy.  The feeling of deep depression is palpable – it wafts on the air like gritty smoke – it fills your soul with remorse and sadness and regret.  Vendors sit apathetically outside their stalls filled with goods that won’t sell, reading the paper, looking at their cell phones, smoking cigarettes, avoiding any conversation that might spark attention.  Trust was at a complete standstill.  At least four different sets of armed IDF soldiers pass by us, all within the hour of our brief visit.  What could make the feeling of occupation feel more acute than that?  Daoud says the vendors are being taxed out of occupancy; one more way to get rid of the Palestinians – quietly, efficiently, under the radar – intelligent evil at work.  I must say, though, the vendor selling his protest t-shirts brought joy to my heart.  Other than that, apathy and fear tinged with resignation were the winners. 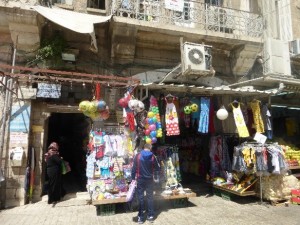 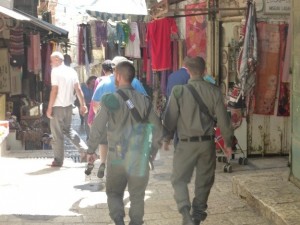 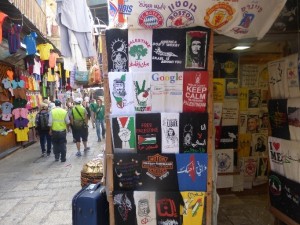 I felt the depression seeping into my own psyche.  Even the tourists were quiet – or maybe just tired.  You couldn’t really avoid the oppressive feeling, however, especially if you knew even a little bit about what was actually happening.

We saw Tel Aviv from afar – from the air and from the windows of the transport van taking us to Jerusalem.  It looked like a cold, distant city with little character and certainly little history, especially compared to the lovely old villages and towns and buildings that simply reeked of ancient beauty, rounded windows, lovely stone architecture with great character.  The settlements, too, were hard-looking, square-cornered, unattractive structures – all looked alike – all reflected the like-minded thinking of the settlers, themselves.  If you never went anywhere near the West Bank, you would think that Tel Aviv and Israel were quite reasonable – modern and progressive.  What could people possibly have against the Israelis?  Unless, of course, you were truly anti-Semitic.  Knowing even just a little bit about the real story, however, flavors your perspective; made me a prejudiced viewer from the very beginning (and not anti-Semitic). 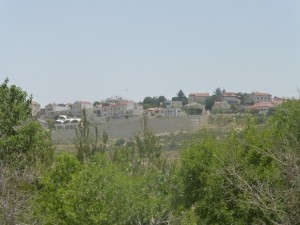 We saw a major road that was being renovated by a USAID project.  It was the road that Daoud used to take us to the farm.  Suspicion behind the motive was the name of the game:  Will this road, one day, have portions turn into an Israeli-only road?  Where will that begin and end?  Why would they fix up an old dirt, pot-holed, rock-filled road for the Palestinians to drive on? Why, indeed 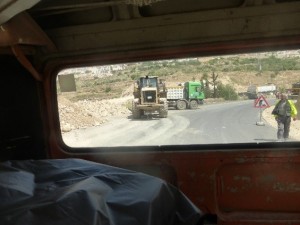 We saw, of course, the wall in its many and varied formats, keeping people either in or out – mostly keeping people separated from one another.  The length of it in places took away my breath, however, which a single picture can’t even begin to capture.  You would need to look into mind’s eye in order to see it in all its snake-like appearance. 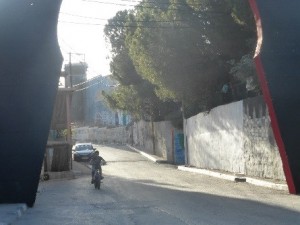 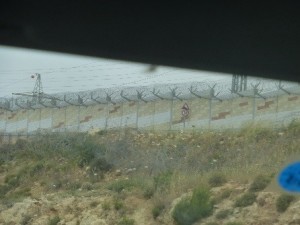 My first sight of a ‘real’ guard tower brought to mind, immediately, visions of the concentration camps from WWII.  What does go through the guards’ minds as they climb into those formidable structures to spy on the land and people around them?  They have to be depressed, too.  It is a land filled to overflowing with depression all around.  (Except, of course, in Tel Aviv, where Nentanyahu says that ‘partying’ is the name of the game and that it goes on 24-hours a day.  Now, that’s true depression in its deepest form of denial.)

Daoud tells me to not take pictures even through the van’s windows as we pass this tower (too late!!).  He says that this is a tower with telescopes so powerful that they can see right into the windows of passing vehicles and can take pictures.  I hope they got a good shot of me taking this shot of them.  And, maybe this is just an idle threat – part of the fear mongering – not certain.  The creepy feeling from the tower itself lends credibility to the rumor anyway. 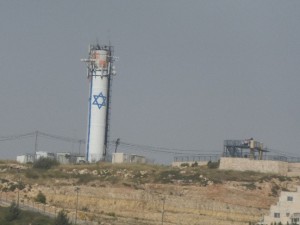 Settlements creep closer and closer; walls keep going up; the Israeli government finds more and more ways to drive Palestinians out; small excuses to over-react with force are found; children are still being arrested, detained with unrestrained use of interrogation tactics that test the resolve of even the strongest of adults, all without legal counsel or presence; homes are being demolished left and right (and all wrong); land is still being illegally confiscated; Gaza is still a sewage dump; IDF soldiers take pot shots at people because they’re bored; pesticides drift over Palestinian farmland, destroying crops and poisoning people and farm animals as well; water is limited; electricity is limited; movement is restricted; courts move slooooowwwwwly; Palestinians are finding it more and more difficult to stay steadfast, especially for the younger generations; Palestinian child labor helps the settlers harvest their crops grown on what was once Palestinian farmland; schools are unequal; kindergartners are denied access to their classes even when accompanied by international support workers; checkpoints are rampant and humiliating; politicians are corrupt on all sides; people are dying; people are killing; and so on and so on and so on.

The bright side?  It is dim for me, and it may indeed change for the worse (remember, I see the world though dark lenses), but it is not yet Syria, Libya, Yemen, Lebanon, Egypt.  It is not yet what is taking place in most of Africa.  Israel’s strength is keeping Palestinians alive as well as Israelis (at least they’re not being killed off by foreign agents within their borders – just by the Israelis themselves).  Life could be harsher.  Again, if you didn’t know any of the subtleties and you were to visit Bethlehem, you would ask, “What’s the big deal?  Shops are open, people are walking and driving in the streets (and parking on the sidewalks), you can buy really good ice cream, the Pope Mobile is parked outside the ice cream store, restaurants are doing a fairly brisk business, kids are playing in the streets and are independent.  Tourists are all over the place.  So what if no one smiles at you.  Maybe they just don’t like tourists.” 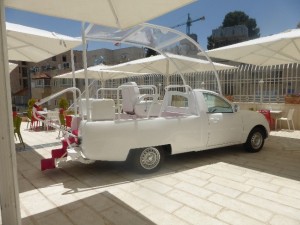 You could live within that bubble until you really look at, and take time to see, the reality of one of the world’s worst terrorist states hiding behind the guise of ‘the only democracy in the Middle East’.  Our country’s complicity in this charade is disheartening to say the least.  And, this is what takes me to the dark side – my dark lens on life – the ‘I-don’t-think-there-is-much-hope-here’ attitude.  This is the way I feel when I look at the overall situation.  I still cannot grasp the untenable use of tactics against another group of people that were once used against you.  That horror knows no owner, I guess, unless it simply belongs to all of mankind.  Is there such a thing as mindless intelligence?  Or, intelligent mindlessness?  One or the other is at play in this situation.

But, that doesn’t change one iota of my efforts on behalf of the Nassars and their struggle.  There is a basic principal at play here, and even though I know I can’t bring about peace in the Middle East, I will still help this family as much as I possibly can as they play David to Goliath, place a flower in the barrel of the military’s might, show patience in the face of impertinence, work the courts within their own rules, stand up and say, “Let’s not be enemies”.  The world needs more Daoud and Jihan and Daher and Amal and Milade Nassars in it.  My support is based solely on the strength of this family’s intelligent, sensitive, caring character.  When you find a rare gem, you save it.  When you fight for a principle, even if you may lose, you still win in the end.  That is where I find my light.