To Honor All of the Dead in Jerusalem, We Must Redouble our Efforts Toward a Better Future 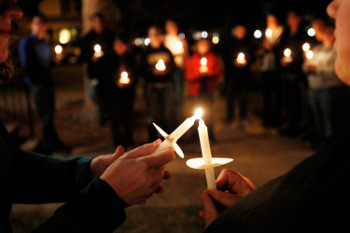 When we heard the news of the brutal murder of Rabbi Moshe Twersky, 59, Rabbi Aryeh Kupinsky, 43, Rabbi Avraham Shmuel Goldberg, 68, Rabbi Kalman Zeev Levine, 55, and Zidan Nahad Seif, 30, we felt deep horror and grief. We mourn and condemn the gruesome murders at the Har Nof synagogue. Our hearts break for the victims and for their families – may their memories be for a blessing.

Any act of violence, especially one against civilians, marks a profound failure of human imagination and causes a deep and abiding trauma for all involved.

All lives are sacred. With every life taken, God’s presence is diminished in our world.

In mourning the five lives lost in Jerusalem this week, we reject the pattern of condemning the loss of Israeli lives while ignoring the loss of Palestinian life. We also mourn the daily killings and other forms of violence against Palestinians which are all too often ignored, dismissed, or rendered invisible by the ongoing occupation and oppression of Palestinian people.

We mourn for the families of Mayar Amran Twafic al-Natsheh, 10, who was shot in the face by Israeli military; 11 year old Saleh Samer Attiyeh Mahmoud who was blinded by close range Israeli gunfire; 14 year old Palestinian American Orwah Hammas, 21 year old Mohammed Jawabreh, both shot and killed by Israeli military, and 22 year old Khayr al-Din al-Hamdan, a Palestinian citizen of Israel killed by the police.

As we mourn all of these lives lost, it is important to ask ourselves honestly: how will we memorialize the dead?  The only way to fully honor their memory is to put our grief in context.

To this end, we reject the narrative that views such tragedies as part of a “cycle of violence” between two peoples locked in interminable conflict. Rather, we believe they occur within an overall context of structural violence: i.e., an Israeli system of power and control over Palestinians.

As JVP pointed out in our recent statement, “Prime Minister Benjamin Netanyahu’s declared intention to further entrench Israeli control over all of Israel/Palestine and pursue the collective punishment of Palestinians will bring neither peace nor quiet.”

It is clear that allowing this oppressive status quo to continue will only mean more bloodshed, more grief, and more horror for both Israelis and Palestinians. If we are truly to honor the memory of all the dead in Jerusalem, we must redouble our efforts toward a future of equal rights and equality for all who live in the land.

With hopes for a just peace soon and in our day,

Rabbis Alissa Wise and Brant Rosen
Co-founders of the JVP Rabbinical Council
P.S. Here are a handful of thoughtful articles that we found helpful in making sense of this weeks events: